Ting Tong Chang “Whence do you know the happiness of fish?” – February 2015 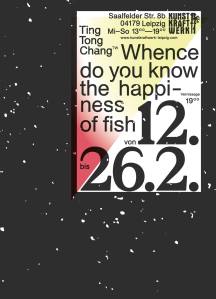 “Whence do you know the happiness of fish?”
Taiwanese Artist TING TONG CHANG

Ting Tong Chang creates large-scale installation works that look to analyze the relationship between science, technology and society. Chang purposefully builds his installations to be like ‘machines’, which not only encourages audience participation, but also reflects the motivations behind his works. The themes explored in Chang’s installations echo his early life in a Chinese society focused on manufacturing, exportation and the materialism associated with an industrial area.  When Chang moved to the UK, his artistic style evolved to address the wider issues of consumerism in Western society and the environmental concerns that have stemmed from this dichotomist relationship. Chang describes his journey to the West as the move from one machine to another, from the production of products and the resulting pollution to a machine that generates profit and crisis. For Chang, the machine is a metaphor for a society where products, political discourse, and ideologies are produced. This relationship is revised using everyday materials and found objects in a way that stimulate new perspectives from which to perceive contemporary culture.

Chang’s process thrives on the tension between planned and random elements encountered through his live installations. The use of local construction materials by means of an abusive interaction with external arbitrary factors like time and natural conditions produces an installation that forsakes any predetermined output. All that emerges from these collaborations is embraced as part of the working process and become the fundamental tools redefining conventional notions. According to Chang, “The conventional idea is that machines are productive and efficient in order to take the place of a human.” Pairing grandiose with pathetic, he challenges this notion by making machines closer to what he sees as humans: anxious, quirky, idiosyncratic, and often unproductive. Based on the operation of his current creative practice, he uses his sense of humor to turn his thoughts of everyday happenings into a comedic performance about these human characteristics.